Come Enjoy The Weather And History Of Cornwall 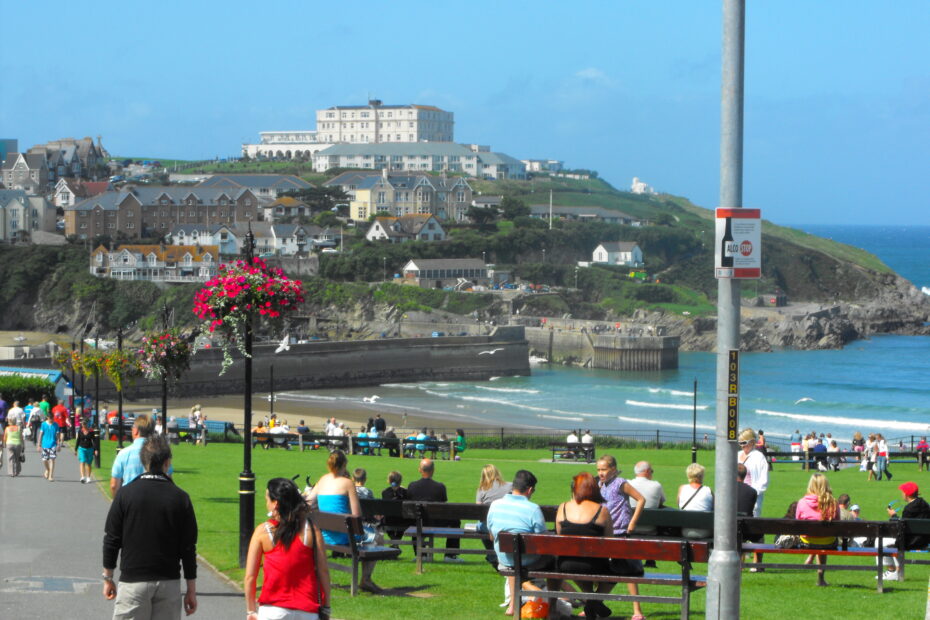 Come Enjoy The Weather And History Of Cornwall

What makes holidays in Cornwall so special? There is so much that makes this county special and why thousands of tourists flock to the area every year. Cornwall is one of the more popular vacation destinations in the United Kingdom. It attracts both foreign and domestic tourists alike. The beauty of Cornwall is undeniable. Another reason that Cornwall is so well suited for vacations is because of the wonderful climate and temperatures.

Weather in Cornwall, especially during the summer months allows vacationers to really take advantage of all this region in the United Kingdom has to offer. However, Cornwall is not a place of mere beauty, pleasant weather, and superficial fun. It is also an area that boasts a rich history. If you would like to know more about what Cornwall has to offer in terms of the weather and historically, keep reading!

We all know that the weather can make or break a holiday. So, it is always prudent that you find out what the weather would be like when you plan to visit. One of the reasons that Cornwall makes such a perfect holiday destination is the absolutely delightful weather. The weather in Cornwall is relatively milder and warmer than in other places in the United Kingdom.

Most holidays are planned in the summer and July is the warmest month. However, Cornwall never gets unbearably hot, so if you are planning a summer vacation, the temperatures are very comfortable. July and August usually have temperatures of 15-17. Wonderful weather for outdoor activities like swimming, hiking, surfing, rock exploring, biking and so much more! Cornwall beaches are usually filled with holidaymakers who are out taking advantage of the sea, sun, and sand.

January and December are the rainiest and coldest months of the year. Temperatures can sink to about 6. While these months are not the most popular months for tourism, you can still enjoy the cozy winter atmosphere. You can bundle up indoors and still enjoy the wonderful views that only Cornwall can provide. Christmas in Cornwall during those cold months also has its own appeal.

You should not miss the Christmas lights in Mousehole. If you have children, they will be thrilled by Santa by Steam. Nothing says winter wonderland like ice skating at the Eden Project. So do not think that you would be without activity when the winter weather rolls in. Weather in Cornwall can be enjoyed in different ways throughout the year.

What Should I Know About The History Of Cornwall?

Cornwall is one of the places with one of the richest histories in the United Kingdom. There are so many stories and legends that surround this region if you are a history buff, you will be in your element.

In ancient times, Cornwall was called “Cornovii. Which is loosely translated as “horn people” Cornwall was a thriving farming area. There were several tribes that occupied this area. The area was ruled by the Romans for a time and then eventually was under the purview of the English monarchy. The title Duke was introduced during the English rule. Tudor Dynasty squashed any remnants of Cornish Autonomy but the proud Cornish people did not give up without a fight as evidenced by the Prayer Book Rebellion and the 1945 Cornish Rebellion. At the turn of the 19th Century, Cornwall has some of the largest mines in all of Europe and the area thrived. The copper industry was based in West Cornwall.

Many people emigrated after the mining trade started to decline. Of course, history is inexplicably linked to his people and there are several famous Cornish people or people who belong to the Cornish diaspora.

Here are a few of the Cornish figures who helped to shape the history of Cornwall and the world at large.

• Richard Lander- Explorer who made great strides in Africa

• Henry Trengrouse- Inventor of the rocket

As you can see the Cornish people have made an undeniable mark on the World’s stage. Another antidote of count is that the title Duke of Cornwall has been awarded to the King’s or Queen’s eldest son since 1421. It is a longstanding tradition within the British Monarchy. This is only a small sampling of the history in Cornwall but we hope it is enough to pique your interest in our beloved Cornwall.

What Are The Historical Places In Cornwall That I should Visit?

It is an amazing feeling to stand in places that are rich in history. It reminds us that we are all connected and that we stand on the shoulders of those who went before us. If you really want to connect with Cornwall’s past. You should definitely visit some of the places below:

It is located on the Fal Estuary in Falmouth. The history behind the place is quite intriguing. Henry VIII built this artillery fort between 1540and 1542. They were used during the Civil War all the way up to the 2nd World War.

You will feel as if you have entered a different world with its stone staircases, turrets, and gun rooms. You can also see a panoramic view of Falmouth.

You can book your ticket online where you will be able to take advantage of the best price deals. However, there is nothing wrong with simply being spontaneous and going to visit Pendennis Castle. This majestic structure allows you to step into a part of Cornwall’s history

The Minack Theatre in Cornwall is an outdoor theatre that has seen many famous performances over the years. It was designed by Rowena Cade after the First World War. The first famous play performed there was Shakespeare’s The Tempest. It was a resounding success. In 1944 a portion of the film “Love Story” starring Margaret Lockwood and Stewart Granger was filmed there.

Today between March/April to September, UK and US theatre companies perform plays in front of packed audiences. The open-air experience is unique and should definitely be on your bucket list.

If you are on vacation in the Cornwall area, we encourage you to check the Minack Theatre schedule online to book in advance. Even if you are not interested in a play, you can simply visit the Theatre and surrounding gardens. You will not regret this incredible experience.

It is a granite island off the shore of Mount’s Bay. A fairy tale castle sits atop the hill surrounded by breathtaking gardens. This dreamy locale can be reached via a tidal causeway. This historical place in Cornwall is steep in much mystery.

From as early as 495AD, stories have been heard about St. Michael Mount. Sailors swear that those who were tempted by mermaids to crash upon the rocks were led to safety by the ghost of St. Michael. It is said that the Archangel Michael himself appeared on the island to protect them from certain dangers. Over the years many people have visited the island to pray and celebrate St. Michael.

Between 1262 and 1263, there were claims of 4 miracles occurring at St Michael Mount. People visiting the island sense that there is a different energy at the sight. You may also be regaled by tales of Jack the Giant-killer which all adds to the mystique of the place. Castle construction started in 1066. However, St Michael’s Mount changed hands several times. It was seized in 1473 during the War of Roses by Henry La Pomeray. It was also held by the Earl of Oxford. The mount has seen many a battle in its day.

You can book tickets online. Holidays in Cornwall would not be complete without a visit to St. Michael’s Mount.

If you don’t mind visiting a place with a dark past, you definitely must see the Bodwin jail. It has played a major role in Cornwall’s rich history. It was built by King George III in 1779. It is located on the Bodmin Moor. The king enlisted the services of Sir Joh Call, a military engineer.

It was a first of its kind in prison design. It was incredibly modern for its time. It was built with airy areas, installed hot water, work areas, and adequate living quarters.

It was extended many times over the years to accommodate a growing population. Due to changes in the law over time, the prison was modified to segregate the different types of prisoners.

Queen Victoria rebuilt it from 1856 to 1861. More changes were made depending on the reforms of the day. There were dark days at Bodmin jail. There were 55 executions carried out there. A visit to the Bodmin jail is not simply a tour, they bring to life the darkest moments in the facility’s history.

The castle is located on Tintagel Island. It was built by Richard the 1st Earl of Cornwall during the Middle Ages in the 13th Century. Myth and history live side by side at Tintagel Castle. King Arthur is thought to have lived there.

The first Duke of Exeter, John Holland was the constable of the castle in 1389. It fell into disrepair many times over the centuries and changed hands just as often.

You can book your ticket in advance, but you can just show up on a day that is convenient for you. You can wear a face-covering if you like. Hand sanitizer is distributed to help to keep the visitors safe.

Truro Cathedral is located on St. Mary’s Street in Truro. This beautiful Anglican church was built somewhere between 1880-and 1910. One of its unique features is that it is one of three cathedrals in the UK that has 3 spires.

All are welcomed at the Truro Cathedral. You will see some of the most beautiful stained glass windows. If you are fortunate enough to attend a service there, you may hear the haunting sounds of the organ. This organ is a piece of history in itself. It has been in the church since 1887 and it is considered one of the finest organs in the country. To simply hear it is to be a part of something greater than yourself. There are 10 bells that ring at the top of Turo Cathedral. You are asked to wear a mask if you decide to visit Truro Cathedral. You can check their website to get the schedule of their services.

This attraction is situated on the north coast of Cornwall. Historical records indicate that a mine existed at the site as early as 1692. Tin production at the site was not as successful as the industrialists would have wished and eventually the mine was closed in 1914.

You can visit the engine rooms. Visitors are often fascinated by the two main engine houses “Old Whim” and “New Whim”.

Wheal Coates Tin Mine is remarkably conserved. When you combine the history of the mine and the wonderful views that the location provides, you have a truly memorable experience..

We invite you to stay with us while you learn about the history of Cornwall. Our guesthouse is ideally situated in Newquay, giving you comfortable access to many Cornwall historical wonders.

Avalon Guesthouse offers cozy accommodation and a scrumptious breakfast before you head out to explore your historical haunts ad enjoy the famed Cornwall weather.

Our staff is committed to making sure that you have a comfortable stay. All Covid-19 protocols are observed at Avalon Guesthouse. We religiously sanitize our common areas and the rooms. Feel free to let us know how we can make your stay more comfortable with us.

We pride ourselves on providing the customer service that you and your family deserve. We are the perfect springboard for your next adventure. Hope to see you soon!